I am on location on an Island in Eastern Canada.

I’m on location out here on an island in Eastern Canada. I’m having such a great time here, I wanted to share with you a few things I’ve been working on out here.

I’m shooting a short video compilation for a band that’s playing out here. This is a great way to get started- by making short videos that will be used to promote an artist or entrepreneur on social media. Keep in mind, the videos should be short. This doesn’t mean you shouldn’t have tonnes of footage. When the question of whether or not you should shoot more footage.. The answer is always -yes! However, in post production editing, it’s important to be ruthless and keep only the best. Get a second eye to watch your film a few point out any issues like maybe they find certain parts drag on or don’t fit with the continuity or style you’ve established. A second opinion helps. It doesn’t matter if you risked life or death to get that shot, if it doesn’t fit- cut – it – outttt.

I have already worked with this client before. They liked what I did with their last video providing a short clip of insight into their road trip to the town Tadoussac for Festival de la Chanson. I’d like to show you some of the colour grading and font choices for this video and share with you some advice.

1.) Keep it Short and Concise. You shouldn’t exceed three minutes in length. Mine was between 1-2, just to highlight their road trip to the festival.

2.) Colour grading is everything. It’s the way you show you have style and a cinematic eye. The look and feel of a video is what gives it that cinematic quality and depth. Staying on top of trends helps. You can often ask your client what kind of look they’re going for or get a feel of the audience it’s marketed to. I love to use VSCO.

3.) Have a Great Font selection- I love it. When I’m working on a project, I honestly can’t wait to get done colour grading and editing just to get to the font selection portion of my work. Did I mention it’s one of my favourite parts?.. Because it is. Once again, your clients overall goal is important to keep in mind because you want them to be happy with your service, but you also want it to be true to your own style. You don’t want to make a video that you can’t be proud of. If you have great natural visual and aesthetic appeal, you might want to be true to your instinct. Some business owners are great at the money side- but the whole reason they hire creatives- especially young creatives is because we’re in touch with the artistic and visual trends in the market. Another way of putting it- We know what looks cool.

4.) Social Media Tags are important for most clients. Don’t under estimate them. Your client wants to get the most traction and

advertising they can out of this video. Including their twitter handle or plugging organizations involved is a great way to ensure that more eyes see this video. For instance, in this case- I will be plugging the festival they are going to and now the festival might use this video and promote the band at the same time.

Another example : Just yesterday we shot the boys from Mehdi Cayenne Club at a wind surfing competition. We got some beautiful shots there and one will definitely include the name of that competition. Why? You’re not working for that surf competition? This is not just good for the the group that organizes this competition, but also good for your client! It not only makes them look good to be at community events- but more people are bound to tune in to see the video in hopes that they might be in it or to check out the footage from an event they too were at too. Tagging a video appropriately on social media and including more sources or organizations captures a broader audience appeal- which is what you want -more people to watch you work.

ere was a radio interview the band leader was scheduled to attend, so I made sure to include it in my footage and also appropriately plug the radio station. This makes the artist look good because the radio station gets more traction on social media because of doing the interview with your client and because of your presence there.

As I was leaving, the radio host asked me if she could have a copy of the tape when I was done. These are scenarios where you might get another freelance job simply because you showed up, did your job well, and now someone else is interested in potentially working with you.

5.) Though this is great, I had immediate experienced a flood of regret. To avoid this flood, learn from my mistake. Notice how there is only one window in that radio studio and it’s located directly behind them from the angle which I am positioned? That, my friends, is NOT ideal lighting. I kept itching to get on the other side of them so the light would hit their faces and not do what we refer to as “back lighting” (because the sign is to the back of the person.)
Back lighting essentially blows out the image- turning human beings into silhouettes. You lose a lot of the necessary features and information.  It can sometimes be cool, like in the picture below, but more than often should be avoided. 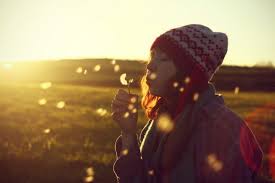 6.) Follow your Instincts – The main message is this- I didn’t do what I felt my instincts and knowledge telling me to do because “I didn’t want to be in her way.”

As I left, I was kicking myself. She was clearly interested in the film! I’m sure I could have gotten away with taking up more space and really moving to get the good stuff that I had neglected to get because I didn’t want to be disruptive. Being more communicative about what’s acceptable in those situations would have been to my benefit- Lesson learned. As women, not just in film, but in any career- we need to really work through that. We are socialized in a society that constantly tells us to take up less space- be smaller, quieter, this can be a challenge especially when you work in a male dominated profession. I encourage you as female professionals to own your value and take up any space necessary to do the job to the absolute best of your ability.

ou the trials and tribulations- sometimes frustration of showing your client your video.  I showed them the previous video- the one I have featured here and one of the band members ( not the one paying for the video) said, ” I hate it.” He kept saying he never wanted to see it again. Saying these things to a filmmaker, you’re basically projectile vomiting on our souls. After hours of editing, just to have someone dismiss it can really make you want to pull out all your hair. Fortunately, with grace and calmness, I inquired about what he hoped to see in the future that could illicit a different reaction…. I was glad I asked. It turned out he just hates seeing himself on camera. It had nothing to do with my video.. This is something you’ll come across a lot and an important distinction. Many people don’t know how to distinguish between them not liking themselves or seeing themselves on screen with them not being happy with the actual video. Don’t be discouraged!

8.)  Use what you have. Be inspired by the beauty you find around you. Old cars and boats, a cool building-  anything! If you have an artistic eye, you can make it look marvellous. On this island, I found so many beautiful ships that I will be incorporating into my footage. I hope you enjoy.

Please share with me some of your experiences and don’t forget to Sign Up to be on the next collective skype meeting to share and contribute to ideas and discussion at the women’s film collective!

One thought on “On Location in Les Iles de la Madaleine”