Posted on March 18, 2018 Posted in female filmmakers, women in film, women of colourLeave a comment

Stacy Smith recently caught my attention as the Los Angeles Times featured a great article highlighting the issues of sexism in film and television by referring Smith’s research. Check the article out below:

Professor Stacy Smith and the USC Annenberg Inclusion Initiative found that women made up only 4.3% of all directors of the 1,100 top films released from 2007 to 2017. That represented a ratio of 22 males to each female director. In addition, only four black females, three Asian females and one Latina directed any of those 1,100 films.

“When people think of a female director — it’s a Caucasian female,” Smith said Thursday in an interview. “There were only eight women of color directing those 1,100 films, including only one Latina — that shows something in the system is broken.” 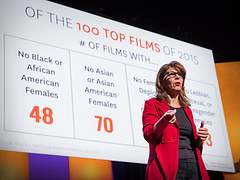 She has been mobilizing and taking her research to more stages. Enjoy her TED Talk  Here.

Posted on January 12, 2018 Posted in women in filmLeave a comment

There has been much talk over whether or not Oprah will run for President of the United States in the next election. Whatever your thoughts or views are concerning that, there is one thing no one can deny- she gave one hell of a speech!

Shout out to CBC for launching it’s “Breaking Barriers Film Fund”which acts as a resource for filmmakers who have historically been at a disadvantage in accessing financing and making their unique voices heard. This fund is meant to support underrepresented Canadian creators. Find out what you need to apply: Here.

Posted on January 3, 2018 Posted in women in filmLeave a comment

Issa Rae is everything. She is one of the most exciting and talented women in the game right now. Most recently due to her success with her new HBO series “Insecure,” but she has been a favourite of mine for much longer than that.

Issa Rae is someone any aspiring web series developer should be taking note of. First, because she’s incredibly talented and hilarious, but also because she’s incredibly open about her process and journey getting to the level she’s at today. She even produced a series called INSIDE -Issa Rae Production where she gives an inside look at how the series and the projects she’s working on comes together. Wow, what a great resource and tool. If you’re someone aspiring to create a successful web series and need some inspiration- Issa is IT!

She started with an idea and minimal equipment, she had her friend hold the camera for her to shoot her first episode of “Awkward Black Girl” . Guess what? It is hilllarrrriiouss. It was the jump off point of her career. She didn’t wait for a big budget or for all the right pieces to come together- she just began with what she had.

If you haven’t seen Awkward Black Girl or Insecure- do yourself a favour. You can find the whole season of Awkward Black Girl on youtube or check out her new show “Insecure” on HBO. I would also encourage you to check out some interviews with her because all that comedy and drive doesn’t only express itself when she’s producing a web series- she’s also brilliant and funny in interviews as well. Word is that Issa Rae is working on a Sci- Fi Project and show about black teens. Find out more: Here.

I came across this kickstarter campaign and it gave me all the feels. It’s a film festival for documentary films about women athletes. In a time where the hype is at its highest for movies about fictional, bad ass women such as Superwoman, let’s not forget our own super women- the talented women and girls around the world competing in the sports they love! While the top men’s basketball players are signing hundred million dollar contracts, the Lebron James of the WNBA aren’t even pulling in a million. There is so much strength to be celebrated in real life, by real women – what a beautiful campaign to honour the fierce dedication and strength of women of all ages in sports. Those of us who are media makers and film buffs can see the opportunity, the necessity and the hunger for content like this. People want to see films and media celebrating the diversity of our strength. Check out their campaign. I hope you get inspired as I did.

I hope these resources are helpful to you, please let us know if you know of another organization doing great work who we should feature that is helping to support and showcase women in film.